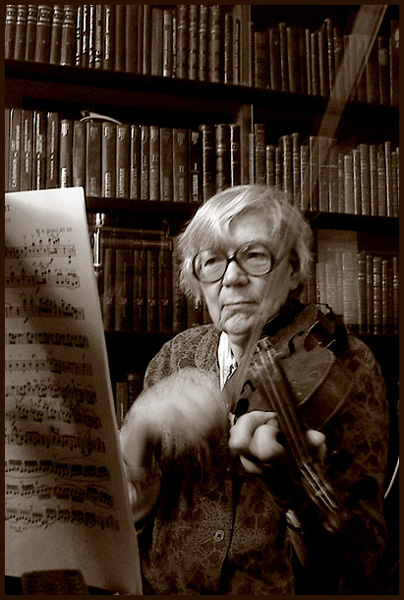 Lovely study. I particularly like the blurr of the bow and hand. Just the right amount to show motion

Sandra, the two versions are interesting to compare. I think the lighting and the angle are a bit more favorable here, but out of the two I lean toward preferring the first one because the hand movement is much more expressive there (in fact it`s the strongest element, I think) - there it looks as though it were almost crippled somehow, yet very strong and capable of producing music. I like the face expression less here too, it`s less interesting. Her clothing is much better illuminated here, and the details more readable. Also because of favorable lighting, the book case can be seen much clearer. And, I think it makes for a nice touch the fact that the bow strikes a diagonal, piercing the upper right corner. Still, as I flip back and forth between the two photos, I pick the first as a more successful one. Not ideal, but more advantageous than the one above. There, the violinist is given more space, here she`s "suffocating" a bit. There, the bottom is gradually cast into darkness, which is potentially symbolic. There, the instrument is more alive as it shines. The photograph behind glass in the 1st one is also rather significant - a daughter who is no longer around? a student who has gone one to achieve great things? whoever... I hope you don`t mind all this babbling... I found it interesting comparing the two portraits. Almost feel like I`ve attended the performance

I guess what would`ve been ideal, and what would have minimized the technical glitches is a tripod, or something like it. Which, i understand, may not have been possible. Well, thank you for sharing in any case!

Good background for this shot and love the blurred bow as the violinist plays. Good work, Babette!

Sepia is much to the point here!

fixed absorbed look...age that has been spent in study and perfecting talents...monochromatic tones accentuating ambiance...magical dynamic hand directing the bow...note in front and books backing this marvellous solist, result in an overwhelming Sonata interprtation, BABETTE!! You are unsurpassed. Added to my favorites is an honour to me.

The good snapshot - is a pity, that a hand and bow indistinctly it have turned out.
If the violinist was younger, then it is good. And here dynamics is nothing.