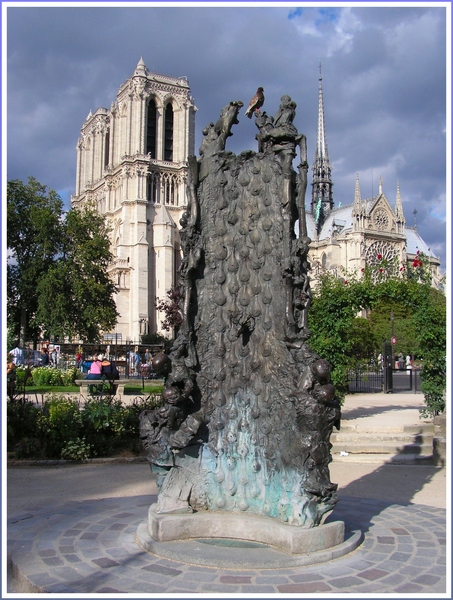 info
photo:
Fountain in square Viviani. cr
photographer:
Valeriy Bespalko add to favorites
section:
+ discussion
categories:
architecture, travel, landscape
tags:
Europe
album(s):
French moods
place:
France
notes:
Square Rene Viviani is located on Quai de Montebello, in between rue Galande and rue de Julien le Pauvre. It sits on the Left Bank of the Seine river, just opposite the Cathedral Notre Dame.
The Square actually gives one of the better views of the cathedral Notre Dame.
Square Rene Viviani is named in honor of Ren&#233; Viviani, the first Minister of Labor of France during 1906-1910. The Square was first open to the public in 1928.
The area occupied by Square Ren&#233; Viviani was originally a Merovingian cemetery.
The small Church of Saint Julien le Pauvre, Saint Julien the Pauper, borders Square Rene Viviani to the south. It is one of the oldest, if not the oldest, of churches in Paris. It was built between 1170 and 1240 on the ruins of the 6th century church of St. Julien the Martyr which was named for a 3rd century soldier martyred at Brioude, in Auvergne. This church of St. Julien the Martyr was destroyed by the Normans in 886.
The legend of St. Julien le Pauvre has it that St. Julien mistakenly killed his parents. To atone for this sin, Julien built a hospice near a river where he and his wife cared for the sick, freely lodged poor travellers and ferried them across the river. One of these travellers happened to be Jesus disguised as a leper and forgiveness for Julien's sin was granted.
This St. Julien is a patron saint of travellers and ferrymen.
In the middle of the Square Rene Viviani is a tall, triangular shaped bronze fountain in a sunken circular area. It was created by Georges Jeanclos in 1995.
The fountain of Georges Jeanclous represents the legend of St. Julien le Pauvre, the Hospitaller. The fountain is decorated with drops of water and stags.
Julien lived next to a river and the stag is one of his symbols, in that a talking stag is featured in his legend.
This legend was very popular in the Middle Ages as well as having been retold by Gustav Flaubert in his "Les Trois Contes" ("The Three Tales") of 1877.
published:
Fri 11 Jan 2008 17:44
permanent link:
https://www.photoforum.ru/photo/412681/
comments (2 from 2)
all comments descending