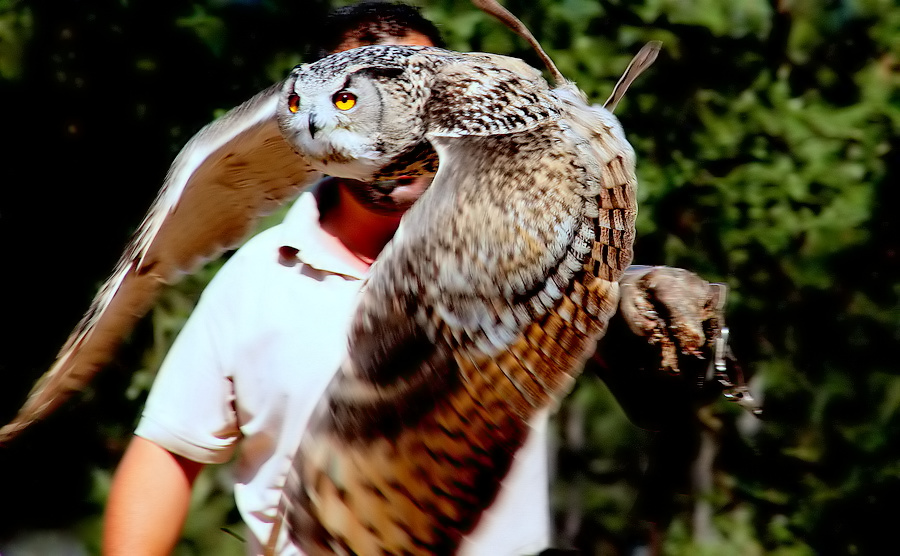 info
photo:
"Take-off..."
photographer:
Joaquim Simoes add to favorites
section:
+ discussion
categories:
nature
tags:
wild animals
place:
Portugal
notes:
The Eurasian Eagle-Owl (Bubo bubo) is a species of eagle owl resident in much of Europe and Asia. It is also one of the largest types of owls.

The great size, ear tufts and orange eyes make this a distinctive species. The ear tufts of males are more upright than those of females. The upperparts are brown-black and tawny-buff, showing as dense freckling on the forehead and crown, stripes on the nape, sides and back of the neck, and dark splotches on the pale ground colour of the back, mantle and scapulars. A narrow buff band, freckled with brown buff, runs up from the base of the bill, above the inner part of the eye and along the inner edge of the black-brown ear tufts. The rump and upper tail-coverts are delicately patterned with dark vermiculations and fine wavy barring. The facial disc is tawny-buff, speckled with black-brown, so densely on the outer edge of the disc as to form a "frame" around the face. The chin and throat are white continuing down the center of the upper breast. The whole of the underparts except for chin, throat and centre of upper breast is covered with fine dark wavy barring, on a tawny-buff ground colour. Legs and feet are likewise marked on a buff ground colour but more faintly. The tail is tawny-buff, mottled dark grey-brown with about six black-brown bars. This plumage may vary slightly in different subspecies but is consistently distinctive. Bill and claws are black, the iris is orange (yellow in some subspecies).

Exellent photo, so expressive and dinamic. Such a powerful movement of the wings, such an irresistible look of the golden eyes! ..

Wonderful time! What beautiful eyes and purposeful! Beautiful in flight!