Фото ""A Tribute to the Forcados"" 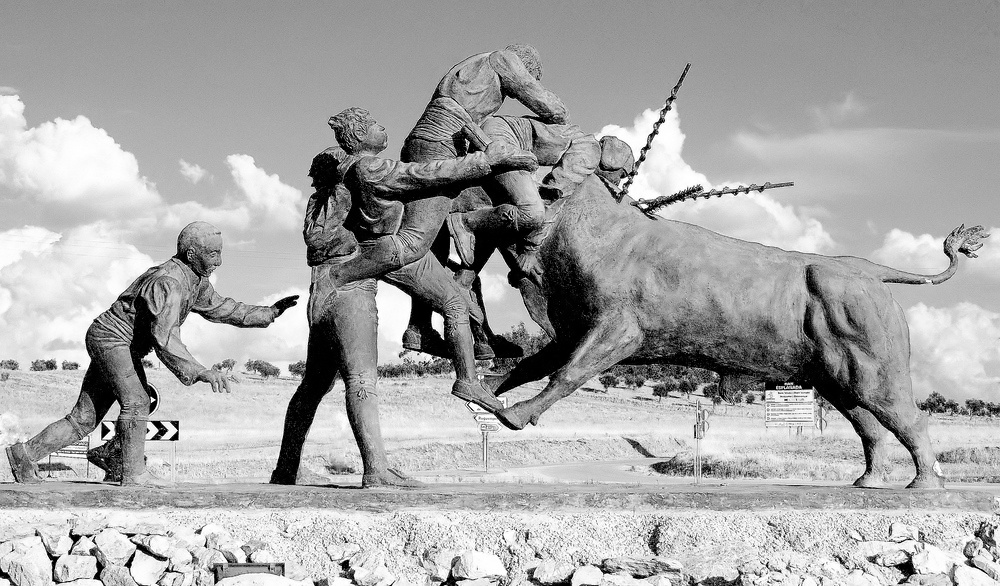 инфо
фото:
"A Tribute to the Forcados"
фотограф:
Joaquim Simoes в избранные
раздел:
+ обсуждение
категории:
черно-белые
место съемки:
Португалия
примечания:
A forcado is a member of the team that performs the pega de cara or pega de caras ("face catch"), the final event in a typical Portuguese bullfight. Forcados were usually people from lower classes who, to this day, practice their art through amateur associations.

In past times the bullring had a staircase to the royal cabin and forcados were employed to ensure that the bull did not enter the stairs. To assist them they used a pole (approx 1.7m long) with a half-moon of steel at the top. This pole is called a "forcado" and it is from there the name comes. Nowadays, they only use a more symbolic, less functional version of it in the cortesias ("courtesies", the opening ceremony) or historical demonstrations.


Pega de caras (face catch) at Cartaxo.The pega involves eight forcados who challenge the bull with their bare hands. They form a line facing the bull and the caras (front man) eggs the bull on by "playing" with it and taking steps forward if necessary to get it to charge. Once the bull runs forward the first forcado times his jump onto the bull's head. Once on the bull's head and holding onto it, usually around its neck, six forcados jump upon the bull in the same fashion as the first forcado, piling upon themselves and grabbing the bull while one forcado grabs the bull by its tail. The objective is to subdue the bull. The forcado who grabbed the bull by the tail (rabejador) is the last one to release the bull after it is subdued. Bull's horns are covered with a protection of leather to prevent it from injuring forcados. Although in popular street bullfights some bulls are released without any protection at all - "em pontas".

Forcados appear in traditional clothing of damask or velvet for this event, including a green, long, knit hat. The campinos, who also traditionally wear the knit hats, are also present at the arena to herd the bull back to its pen at the end of the corrida. The forcados don't wear the hat on their heads, they carry it on their shoulders in the cortesias. During the pega, only the cabo, who is also the leading forcado, wears it.

It's not uncommon that forcados get serious injuries - in 2008 at least one forcado was in a coma for three days - or even death.